This is our kick off blog post where we’ll introduce the team and describe a bit about how we got here. We’ll use our blog to talk about technology, track our journey, and provide updates on exciting happenings for the company.

Stateless has its origins at the University of Colorado, Boulder that was formed to introduce a new software-based architecture for network functions (e.g., load balancers, firewalls, NATs) that was designed from the ground up specifically for a virtualized environment and designed around the dynamics that go along with that (we’ll get to that in a future post). Ultimately, we will make networks dead simple to manage where our software automatically provisions, monitors, and manages the network function infrastructure, or a NoOps model. 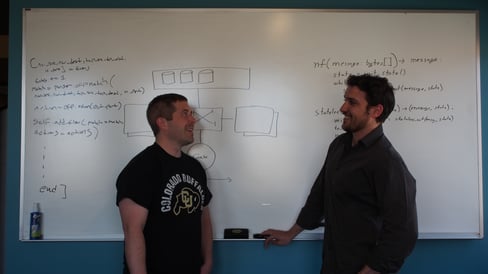 Murad Kablan (right): is an expert in software-based networks, having spent 5 years researching the topic during his PhD studies. Murad’s research, and ultimately PhD dissertation, forms the central technology for which this commercialization effort is based. Murad has interned at places like IBM and AT&T, seeing the need for our solution from the inside. He is the driving force behind Stateless.

Eric Keller (left): is an assistant professor at the University of Colorado, Boulder (Murad’s advisor). He received his Ph.D. from Princeton University in 2011, and has been working in network virtualization and software defined networking for 10 years now. Stateless is culmination of looking at this problem (related to state in the network) pretty much since he started his PhD studies. This is his passion, and he’s doing whatever he can to see this go from the lab to the real world

To understand how and why the team came together, it is important to understand some of the motivation behind the interest in commercializing the technology. As a professor in research area that is largely systems oriented (as opposed to theoretical), impact is not just papers published and citations, but is also largely measured in how one’s research is adopted (adapted) by industry (or the greater community as a whole). The software-defined networking movement really only saw success because of the efforts to promote the OpenFlow standard, as opposed to the successful publication of the 4D work that motivated the need and proposed the solutions.

As such, it is the philosophy within Eric’s research group that to have impact, in many cases, you just need to do it yourself (through commercialization) rather than hope someone picks up your technology. We believe what we have created can radically change the way networking is done, and that drives us.

We’ll skip past the years of research that led to our breakthrough moment — after being told by several people that what we’re proposing is impossible, we proved them wrong and at that point we started feeling we were on to something from our own experiences and from talking to a few people. Murad, as Eric’s first Ph.D. student, was highly interested in taking his research from the lab to the real world to have impact. To begin that process, he participated in the New Venture Challenge (NVC) at the University of Colorado. This is a student startup pitch competition that runs for two semesters, leading up to the final competition. Murad’s pitch was awarded the Techstars award, which recognizes the unique technical potential.

Where we’re at now is we’ve raised some money, building up the team, and getting ready to deliver our first pilot… but that’s all for future posts.