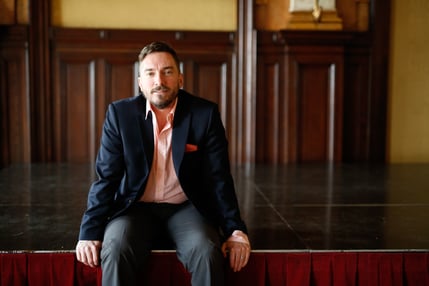 I left my job as a founding partner in a successful venture fund to join Stateless, a startup based in Boulder, CO. This is a weird thing to do; unless of course you aren’t very good at venture capital and your fund is doing poorly. Which isn’t the case here. We have raised 3 funds and a few side vehicles. Our first fund is on its way to doubling investors’ money this year alone and isn’t close to being done. The second fund is showing to be as strong or stronger. The third fund is reaching its first close of $100M, will probably top out at $200M next year, and follows the same model that we proved successful in the first two.No, it wasn’t about the VC business at all. It was about investing in over 100 companies in 8 years, working very closely with nearly as many entrepreneurs, raising hundreds of millions in follow-on funding, and then one day meeting the two founders of Stateless, Eric and Murad, and quickly realizing: not only was their company the fund returner to beat other fund returners, but they had developed a technology with such significant implications at just the right time, that there was no way in hell I was going to sit back in my board seat and just watch it happen. This was going to be another Cisco. The decision to join them was easy.

You can download the data sheets, and check out the patent filings to figure out why Stateless is likely to drive a significant leap in computer network design. Understanding that was step one, and the reason we invested. There was also a question of market timing: a number of factors are putting pressure on traditional computer networking. On-demand everything (especially compute and storage), the migration of enterprise workloads across multiple cloud services, the imminence of 5G, edge computing and hyper-converged infrastructure, all require changes in the way networks are built, managed and how they grow.

But over a couple of decades of building and investing in early stage companies, I came to recognize a few things that are of prime importance and I saw them in Stateless at a level of quality I had not seen before.

Company culture: my job as an investor was often to find a PhD or two who had solved a very difficult problem and could also sell, listen and lead and manage people. If you consider engineering or computer science PhDs, for example (or at least individuals with a similar level of expertise in their subject) and then you apply the other criteria as a filter, you are left with a result that is an infinitesimal fraction of your original talent pool. One of the things that struck me, on my first visit to the Stateless offices, was the company values that had been carefully written up and posted on the tiny office wall. Murad, the CEO, had a clear vision, and realised immediately the importance of communicating this, and setting a tone among the team. The normal MO of a university spin-off is to hire A-students from the department, dive in and start building. HR and culture are an afterthought. But in all the companies I have worked with, this attention to people, and an ability to develop a healthy culture early, communicate a clear vision are key indicators of success.

Deep consideration was given to employees’ strengths and weaknesses from day one, and the organization adapted to make sure that people were not only best utilized, but felt secure. This attention to people paid off quickly, and I had rarely seen a startup environment that was as transparent, supportive and as high-paced and productive.

The other very rare thing that Stateless did from almost the first day was to listen to the market and to customers. The danger of building a business around deep and cutting-edge research is often that you are one of the very few experts in your subject. You can easily forget how to listen, and sprint off in a direction that leads nowhere despite your intellect. After years of investing, I have a unique view on a massive pile of IP assets with enormous potential, now essentially worthless.

Murad and Eric made no such assumptions, and with a disturbing amount of humility simply began to talk to people in and around various target industries. Hundreds of them in a period of months. Systematically. Documenting every conversation and building an evolving record of market feedback. Every conversation ended with a request for more industry introductions. They freely admitted that in the beginning they didn’t even know what questions to ask, but slowly built up their store of knowledge and used it to drive the product design. The number of ‘customer’ interviews and the level of research into the market, while maintaining a minimum of assumptions, was something I had never quite seen before, certainly not in first-time founders (although I had seen methodology that was close in companies that were acquired for multiple hundreds of millions a few years after foundation).

And the precedent that the Stateless founders set by paying close attention, very early, to customers and to the market, meant that the product found fast traction. They spent time understanding what and how they needed to build, and this paid off. We are deploying with some of the largest hosting providers in the world and working with large technology partners and cloud service providers to expand our market reach quickly.

So what will I be doing at Stateless over the next few years? Business development. It sounds like a fuzzy term, and it’s another thing that many startups don’t pay attention to in the early stages, but if you invest in it, it can have an enormous impact on your startup’s mid- and later-stage growth. In this case, business development means a few very specific things: quickly learning about and qualifying new market opportunities and use cases. We are pretty clear on how managed service providers and colocation companies can use Stateless to adapt to the immediate pressure put on their networks by cloud migration, and even turn their networks into an asset. But Stateless technology can transform any network - telecommunications, cloud service provider, fintech, medtech. Who needs us most and when? I’ll be figuring this out. Additionally, working closely with large partners can give us access to large markets quickly, access to technology, and allow us to punch above our weight class until we can handle things on our own. And the timing here is perfect - tech players outside networking are quickly investing in, acquiring and building networking assets. VMWare, nVidia, Intel and many others are realizing that networking is the next frontier in growth, driven in part by adaptation to an ‘as a service' model. I’ll be spending a lot of time with companies like this in the near future.

I don’t regret for a second stepping out of venture capital, a career path that is usually reserved for the most successful serial entrepreneurs, and for whom the rewards are enormous. I’ve only seen an early stage company like Stateless once or twice in twenty years.

Stateless is hiring, by the way: https://www.stateless.net/about/careers

Why I Joined Stateless | The Vision, Culture and Product